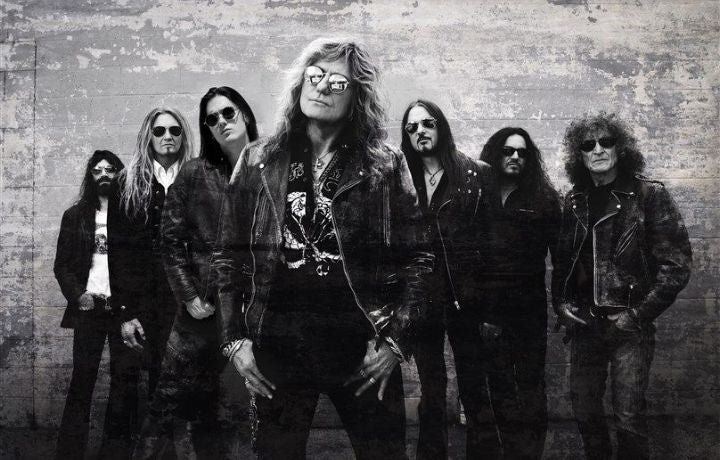 Whitesnake and Foreigner today announce that together they will be hitting the road across the U.K. in 2022 alongside very special guests Europe and will include Utilita Arena Newcastle on Saturday 14th May 2022. Tickets are on sale now!

The legendary artists will tour the U.K. and will be hitting Newcastle on Saturday 14th May 2022. Together both Whitesnake and Foreigner boast a catalogue that spans the decades with seminal and anthemic hits such as “Here I Go Again”, "Still Of The Night" and “Is This Love” [Whitesnake], “I Want To Know What Love Is” and “Cold As Ice” [Foreigner] to name a few. Very special guests Europe will bring their electrifying “The Final Countdown” and more to this U.K. arena tour.

One of the most anticipated tours of 2022, even this mega line-up cannot contain their excitement! “After all the extraordinary challenges we’ve been through together over the last year & a half, I am beyond excited to be able to announce our 2022 UK dates!!! I pray every day we can all make this happen & once again, share unforgettable evenings together & celebrate the amazing journey we have been on for almost 50 years!!! Boys & Girls…Whitesnake, Foreigner & Europe…It Doesn’t Get Any Better!!! Let’s Make This Night To Remember…& Let’s Make Some F@ckin’ Noise!!! says David Coverdale of Whitesnake.

Mick Jones from Foreigner said “We can’t wait to kick off the summer in the UK with a massive tour alongside our friends Whitesnake and Europe. We’re looking forward to playing all our biggest hits for our fans, and rocking across the country”.

Europe’s Joey Tempest said “What an explosive start to the summer of 2022 for us! A U.K. Arena tour with our friends in Whitesnake and Foreigner! YEAH! An evening of some of the biggest anthems in classic Rock! We are truly honored to be invited as special guests”.

On October 29 2021, Whitesnake will release newly remastered and remixed CD and LP deluxe editions of Restless Heart, along with unreleased demos and studio outtakes and a DVD. The DVD includes music videos and a behind-the-scenes look at the making of the album with new interviews from David Coverdale. The set comes with a hardbound book filled with rare and unseen photos from the era. Fans can pre-order the album now.

Mega platinum WHITESNAKE, the legendary rock ’n’ roll band founded and formed by DEEP PURPLE singer and Rock and Roll Hall Of Famer DAVID COVERDALE are proud to announce their Farewell World Tour.  Following the global success of the 2019 studio release ‘FLESH & BLOOD’, WS have played 65 shows in 30 countries to over 750,000 fans. The Farewell tour will feature songs from the bands 13 studio recordings including their biggest hits & songs from one of the greatest back catalogues in rock ‘n’ roll history spanning over 40 years.

Founded in 1978 by former Deep Purple singer David Coverdale, the band have earned multi-platinum albums including ‘TROUBLE’, ‘LOVEHUNTER’, ‘READY AND WILLING’ and ‘COME AN’ GET IT’ through to the explosive hard rock of the revamped ‘SNAKE sound with the multi-platinum ‘SLIDE IT IN’ & having just celebrated its 30th anniversary in 2017, 1987’s self-titled mega-million-selling smash-hit album, ‘WHITESNAKE’.  From these albums came multiple top 10 hits worldwide, including 2 number 1 singles with ‘Here I Go Again’ and ‘Is This Love’ as well as the unforgettable hammer of ‘Still Of The Night’ all leading to virtual 24-hour domination of MTV around the globe. 2020 saw the successful release of ‘The Red, White & Blues Trilogy’ featuring Revisited, Remixed & Remastered versions of some of their greatest hits. Bombast, bravado, talent and passion have helped establish Whitesnake as the perennial platinum favourite they have become and they’re back with a vengeance in 2022. The world-renowned group featuring DAVID COVERDALE (vocals), REB BEACH (guitar/vocals), JOEL HOEKSTRA (guitar/Vocals), MICHAEL DEVIN (bass/vocals), TOMMY ALDRIDGE (drums), MICHELE LUPPI  (keys/vocals) and introducing the extraordinarily talented DINO JELUSIC (keys/guitar/vocals) are coming to venue near you soon.

With ten multi-platinum albums and 16 Top 30 hits, FOREIGNER is universally hailed as one of the most popular rock acts in the world with a formidable musical arsenal that continues to propel sold-out tours and album sales, now exceeding 80 million. Responsible for some of rock and roll’s most enduring anthems including “Juke Box Hero,” “Cold As Ice,” “Hot Blooded,” “Waiting For A Girl Like You,” “Feels Like The First Time,” “Urgent,” “Head Games,” “Say You Will,” “Dirty White Boy,” “Long, Long Way From Home” and the worldwide #1 hit, “I Want To Know What Love Is,” FOREIGNER still rocks the charts more than 40 years into the game with massive airplay and continued Billboard Top 200 album success.

With over three decades and dozens of millions albums sold, including a no1 hit in 25 countries, Joey Tempest (vocals), John Norum (guitars), Mic Michaeli (keyboards), John Leven (bass) and Ian Haugland (drums) are as hardworking as ever, annually performing concerts worldwide and producing new albums that are critically acclaimed by fans and the music industry alike.

#tbt #throwbackthursday to a legendary gig from @jamesarthur23 at #utilitaarenanewcastle in 2020!
A massive thank you to the legendary #littlemix - the #CONFETTItour dates here have been absolutely AM-AZ-ING!!! 🎊🎊🎊 Enjoy the break, but 🤞 we see you again soon! 📷 @simon_dukey - https://www.chroniclelive.co.uk/whats-on/music-nightlife-news/little-mix-confetti-tour-newcastle-23706250
The #lifebeginsagaintour comes to #newcastle tonight! #thewaroftheworlds It's not too late to join us! All info and ticketing information can be found on our website. 📷 @twotw_official
Simply incredible. Thank you for two nights of magic Mr. @sam_fender. 📷 Gary Simpson - Photography by 'Him from Walbottle' #samfender #newcastle #seventeengoingundertour #utilitaarena #utilitaarenanewcastle
First night done, second one tomorrow - and we're definitely leading at half time after that performance! WHAT a gig from @sam_fender! 😱😱😱 #samfender #newcastle #seventeengoingundertour #utilitaarenanewcastle #utilitaarena
Tonight. 🙌🙌🙌 📷 @sam_fender #samfender #newcastle #utilitaarenanewcastle #utilitaarena #seventeengoingundertour
Just two short days to go until @savmarshall1 is back! 🎫🎫 available now on our website. 📷 @metrocentre #marshallhermans #boxxer #utilitaarena #utilitaarenanewcastle #boxing #newcastle
🎮 The Big North Tattoo Show isn't just about the tattoos - indeed, you can get your game on with arcade games all weekend, 7 & 8 May! Tickets available now via our website. Discover the talented artists that will be in attendance at the show - visit @bignorthtattooshow over on Instagram. #bignorthtattooshow #bignorthtattooconvention #newcastletattoo #northeasttattoo
Wor Sam! 🙌😍 Not long to go 'til he's back home #newcastle! 📷 @sam_fender #samfender #seventeengoingunder #utilitaarena #utilitaarenanewcastle
Fancy an extra special night out next week? 🎤 The iconic @stormzyofficial brings his #heavyisthehead tour to #newcastle, 15 March! 💎 We've got an amazing suite package available: · Exclusive hire of 10 seater Executive Suite · Suite host · Fast track access at venue · Welcome drink on arrival · Parking for three cars £800.00 (incl VAT) Contact UAHospitality@eu.asmglobal.com to make a booking.
So, we need to talk about last night!... 🤩 📷 @thewantedmusic 💬 "NIGHT 2 - NEWCASTLE - What an amazing crowd!! Thank you for making it so special 🔥🙏' #TheWanted #Newcastle #UtilitaArena #utilitaarenanewcastle
🤔 Can you guess the gig?! ⏰⏪ #ThrowbackThursday 📆 31 May 2019 📷 Kirsty Steele ❓Clue: They're back performing Utilita Arena #Newcastle, 25 - 26 November 2022! Give up? Answer: @westlife! #gigs #music #live #concerts #westlife
Looking to make the most of your weekend? Fancy a last minute night out? 🎤 British rap luminary @santandave is bringing his 2022 tour to Utilita Arena Newcastle this Saturday 5 March. 💎 We've got an amazing suite package available: · Exclusive hire of 10 seater Executive Suite · Suite host · Fast track access at venue · Glass of prosecco on arrival · £300 to spend behind the bar · Chefs selection buffet (dietary requirements can be catered for) £1,274.00 (incl VAT) Contact UAHospitality@eu.asmglobal.com to make a booking.
We loved having the fantastic @johnbish100 with us last night and his amazing support act Ray Bradshaw! 📷 John Bishop. #JohnBishop #Comedy #Newcastle #UtilitaArena #UtilitaArenaNewcastle
A massive March coming up for @stereophonicsofficial! First, the release of new album #oochya! on the 4th, followed by a massive show here at #utilita @arenanewcastle on the 24th! Tickets available now via our website. 📷 @stereophonicsofficial
💍 Just over a month to go until @thenorthernweddingshow - the ultimate inspirational showcase for couples planning their dream wedding day! Tickets available now. #thenorthernweddingshow #newcastle
This is certainly one of the 'Most Wanted' gigs of 2022! Just under a month to go until @thewantedmusic take to the stage in #newcastle!!!
⏩ Next up at your arena in just a few short days - the sensational @simplyredofficial! Who's coming? 🙌 #simplyred #newcastle
Could Strictly Come Dancing have made our arena look any prettier if they tried? 😍✨ 📷 Tom Gostling #strictlycomedancinglivetour #utilitaarenanewcastle
Just a few days to go until #strictlylive here in #newcastle! Excited??! 📷 @strictlycomedancinglive
Not long to go until this man takes to the stage here in #newcastle - who's joining us for #dave in February?! #wereallaloneinthistogether #utilitaarena #utilitaarenanewcastle 📷 @santandave